What is the Musical Links Investigation (MLI)?

What does the MLI have to include?

Which Musical Cultures shall I choose?

If a musical culture springs to mind straight away, go with it, instincts are a good judgement when selecting a musical culture, however if you have difficulties listen to a wide variety of different musical cultures. Go to you library or look up music via LastFM or Youtube.

Make sure the musical culture you choose is DISTINCT. The IB defines a musical culture as a“learned way of making and using music, which is shared by a group of people, and is usually passed down from generation to generation. Music plays different roles within a culture, for example, in entertainment, ceremony or work."

For example the difference between Swing and Be-bop is stylistic, it is inherently part of the same culture as is Baroque to Classical music. They are not DISTINCT from one another. This is why I would be wary of choosing two musical cultures that are linked to Western music, as the Western culture of music is mostly harmonically similar through the differing periods.

What AM I expected to demonstrate in my Mli?

A. Musical cultures, examples, and links

The first marks are for the selection of the music. One or more pieces of music should be chosen from each of the two ﻿IDENTIFIABLE﻿ and DISTINCT music.

It must STATED, the two or more SIGNIFICANT musical links on the coversheet and the beginning of the script. They must allow for SUSTAINED investigation.

B. Analysis and comparison of musical elements
This is your ability to ANALYSE the music itself. You need to COMPARE and CONTRAST the MUSICAL ELEMENTS. (Such as duration, pitch, timbre/tone colour, texture, dynamics, form and structure). It assesses your ability to EVALUATE their SIGNIFICANCE.

This part of the mark scheme is testing your ability to EXAMINE the musical elements and come up with your well - focused analysis. 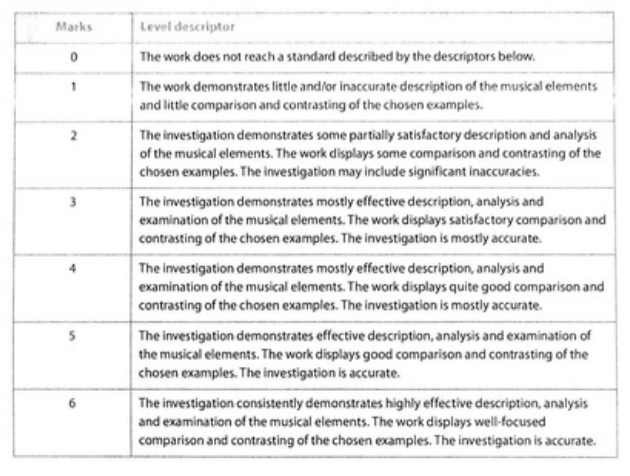 C. Music Terminology
This assesses your ability to use MUSICAL TERMINOLOGY and it's ACCURACY/APPROPRIATE use.

D. Organisation and presentation
This is about how you ORGANISE and PRESENT your material.

E. Overall impression
This means that you have demonstrated UNDERSTANDING and CREATIVITY. That your investigation is interesting to read. Make sure the FOCUS is on the MUSIC itself and NOT the context.

looking at other MLI's. What does a good or a bad mli look like?

Take a look at other Musical Link Investigations by other students and use the mark scheme to analyse them yourself to understand what it takes to achieve the grades for the MLI. Once you have done that, you can fully understand what is expected of you to achieve the full marks. It will also help you decide which Media you would like to create your own MLI.

Do a Google search for EE MLI and you will come up with a few examples.

Here are some ones to help you

A past students example, shared with permission
http://ibdpmusicmli.weebly.com/

Steps to completing your Mli

Step 1
Find two Musical Cultures you are interested in.
Step 2
Find a number of different musical pieces you enjoy within the musical cultures you have chosen. Then narrow that down to one from each musical culture.
Step 3
Do a preliminary analysis of your music. Obtain scores of the music to help you. Analyse the Dynamics, Rhythm, Structure, Melody, Instrumentation, Texture, and Harmony (DR SMITH). A DR SMITH analogy is a useful starting point but you can use any musical analogy that will help you with initial findings.
Step 4
Gather you research - Start collating your Bibliography, that includes books, magazines, journals, documentaries, interviews etc.  Don't forget your Discography too.
Step 5
Make a list of the similarities and differences of the musical cultures. Highlight the significant similarities between the two cultures. This will provide a basis for......
Step 6
Making your links - What are the significant links that you going to make?  Are these links going to allow for sustained investigation?
Step 7
Choose your Media, what media are you going to choose to create your investigation? What will be interesting to yourself and your audience?
Step 8
Do a deeper musical analysis. Use the notes you made in your preliminary analysis and the information you have read up on. Start extracting the musical ideas from the score and evaluate your findings.
Step 9
Plan your MLI, what are the important points your are going to make? How are you going to prioritise the points you want to make? Will the ideas in your MLI develop and flow from one to another?
Step 10
Start your MLI making sure you clearly state the Musical links you are investigating.
Step 11
Make sure as you compose your MLI that you concentrate on the music itself and not overly on the culture that surrounds the music. Do not be afraid to ask your peers or your teacher on any points that you do not understand.
Step 12
As you conclude your MLI do not forget to refer to the links you have stated. A good MLI brings all the ideas you have made to a clear and clarified point.
Step 13
As you make the transition from your chosen media into a media script make sure you check your presentation. As stated in part D of the Mark Scheme;
Step 14,
Review and refine your work. Is your MLI interesting? Have you made your ideas clear and your evaluation, terminology? Discuss with your teacher or peers the process you have taken in your MLI, listen to any criticism and feedback that you receive.
Step 15
Refer to the mark scheme that you have met ALL of the criteria.

Don't forget during the process of the MLI that your teacher or your classmates are available to discuss ideas or give positive criticism to help you improve your MLI. You want to be able to produce a piece of work you are truly proud of.

For discography the format should be as follows

"In an entry for a commercially available recording, which person listed first such as the composer, ensemble, or performer depends on the desired emphasis (MLA, p. 195). This means you can choose if you wish to list the band name, lead performer, composer, etc. If it is a person's name, list the last name followed by the first initial of first name. End with a period.

Title & subtitle of the recording:


How To Be a Megastar Live! or Gershwin Greatest Hits.

The title & subtitle are separated by a colon. Capitalize the first and last words of the title and subtitle, and all proper nouns and important words. Place article title & subtitle in Italics and end with a period. If there is final punctuation like an exclamation point or a question mark, this will replace the final period.

If listed, put Perf. and then give the names of the performers and end with a period.

If listed, give the date of the recording of the album. First put the day followed by the abbreviated month and then year. End with a period.

List the manufacturer or publisher of the sound recording. Place a comma after the publisher's name to separate it from the year of publication.

List the year of the publication of the recording. End with a period.

Give what format you used such as a CD, MP3, LP, etc.. End the citation with a period.

[The above information is based on p.195-96 of the MLA Handbook for Writers of Research Papers, 7th edition].